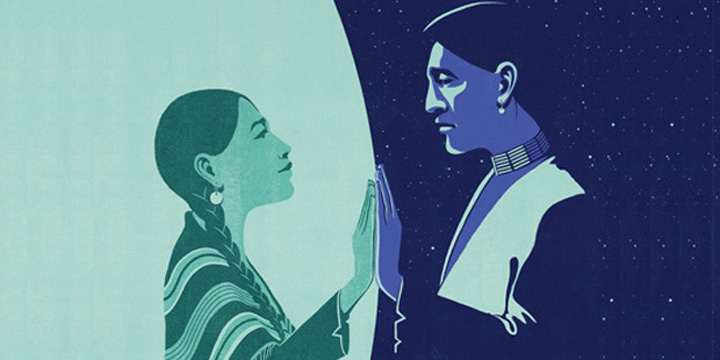 From the Rehearsal Hall: Where the Designs Meet the Love Story

In this series of weekly blog posts, Community Outreach Consultant Tyler J. Sloane will provide compelling content, commentary, conversation, or insight into the rehearsal process of Soulpepper’s first Indigenous production, Almighty Voice and His Wife by Daniel David Moses. Read on for their second blogpost.

“You collide
With my
Creviced edges
Caressing, forceful
Moving against
And With

Apart
We are Immovable

Together
We move just right
Water and rock”
– Fireweed, by Tunchai Redvers Kinoo Arcentales presenting his costume designs next to Ken MacKenzie’s maquette of the set. Photo by Tyler J. Sloane.

Sitting in the rehearsal hall I had many questions about and for the cast and crew of this production. As I always do as an artist and human I enjoy watching other artists compiling all their ideas, inspirations, and thoughts into one giant collaborative work of art.

During the process Jani turned to me and asked, “What does it mean for Almighty Voice and His Wife to be Indigenous led?” Does it look like just a director in leadership? Definitely and Indigenous writer should lead. The whole community must be engaged in leading.

This will be the first time Soulpepper has a play; written by, directed by, performed by, choreographed by, costume designed by, music designed by a critical mass of Indigenous artists.

Very rarely do we get the opportunity to learn about the designers and choreographers that guide and hold the production of the show. We see their aesthetic and inspirations through the set the actors get to play on, coupled with the lights that shift the mood, and the costumes that lay and move across the actor’s bodies. Depending on the show we also get to see the stark movement from the choreography seamless incorporated into the narrative the actors are offering, and paired with delicious and rich music to set the tone of the show.

I wanted to ask our designers and choreographer of Almighty Voice and His Wife with some questions to get a sense of what inspires them and their first thoughts of the Daniel David Moses’s story. Or at the very least share what they’re doing and have previously worked on.

First step – ask our director Jani Lauzon how and why this team of brilliant creatives came together.

“When I am searching for a creative team, the working team is paramount. I need people who compliment each other. Creativity of course is also very important, are they artists who I admire. When it comes to costumes and sound I always make sure that I make every effort to find Indigenous people as that is where the intersection of appropriation will happen the most. I don’t want to explain, I don’t want to fight. I want to know that the history of Indigenous people in this country is understood. As for lighting and set I have admired Jennifer and Ken’s work from afar. I adore their talent. In an institution it also makes sense for me to access designers who are part of the fabric of the organization. They know how things work there, they understand the space and are familiar with the territory. That is a plus for me, as this is my first time working at Soulpepper in my 37 year career.“ So I then asked the initial thoughts of the play to some of our designers. When asking Marc Merilainen he put it down in its simplest essence; “It was ‘Wow!’ I believe great art whether it be in music, theatre, fine art and so on – relies on contrast.  It’s this element that make a great story even better.” Which rings true of all Indigenous work and storytelling I’ve so far engaged with, and was validated by our Lighting Designer Jennifer Lennon who said:

“My first thought of Almighty Voice and His Wife was how much is contained in this beautiful little play. There is a vastness in it, and a sense of intimate moments that reverberate long after they’ve passed. It’s also a history that, even having grown up on the edge of the prairie myself, I had never heard before. I’m honoured to be entrusted with helping bring it to life.” Michaela Washburn and James Dallas Smith warming up before rehearsal laying supine with their legs in the air. Photo by Tyler J. Sloane.

During the design presentation Ken MacKenzie explained that he wanted to give the audience a sense of “Lying on the earth” as an invitation for the audience to perceive the world in a different way. Which reminded me of a story Keith Barker once told me about feeling overwhelmed. In the story someone wise in Keith’s life told him to go to the earth and just put his hands on the earth and breathe. It was healing, if not grounding, for him to reconnect with the earth. Each time we get to share our art and stories are further steps in our collective healing. Having Ken lean into this perspective with the set was such a gift. How beautifully precise it is to have the audience bare witness to this story of Almighty Voice and White Girl, a story about love, from this perspective of lying on the earth.

When Ken was researching and getting a feel for the world of the play, he mentioned the exhibit at the Minneapolis Institute of Art: “Hearts of Our People”.

“It’s a retrospective of native women artists from across North America. It’s stunning. The beauty and the complexity and the wildly varying perspectives… it’s not easy to describe because it’s so many things. But it’s strong.

I was struck by the connection between the title of the exhibit, “Hearts of our People: Native Women Artists” and the quote at the beginning of Almighty Voice, “A nation is not defeated till the hearts of it’s women are on the ground”.

The exhibit doesn’t have anything to say about Almighty Voice or White Girl or Duck Lake, Saskatchewan, but it has a great deal to say about colonialism, resilience, love and beauty.” Lust For Light and Hearts of Our People from the Exhibit at the Minneapolis Institute of Art. Photo Tyler J. Sloane.

On my journey into arriving, being, and thriving in Toronto the first person I was informed to connect with was two-spirit artist Waawaate Fobister.  We wouldn’t meet until quite later when I was witness to his performance at the 2-Spirit Cabaret held at Buddies In Bad Times. All this to say, when I asked Marc who inspired him, he mentioned that he “had the great honour & pleasure to work with Waawaatae Fobister.  He is an amazing artist & brilliant storyteller” on Omaagomaan (World Premiere) in Winnipeg.

The music Marc Merilainen brings to Almighty Voice and His Wife is so alive and exciting from what I’ve been privy to hear. Music is so rich in this play, and when I asked which artists inspired Jennifer (lighting designer) she mentioned singer/songwriter Jeremy Dutcher. Yet another brilliant Two-Spirit Indigenous Artist.

I’ve come to believe that healing and community lies deeply within the women and two-spirit artists hearts.

Almighty Voice and His Wife is a production inspired by the matriarchs and two-spirit people, and if there’s anything I’ve learned thus far through this process – it’s this; As best said by our director herself, Jani Lauzon: “Indigenous love is resilience.”

As we move onward through our process , I’ll leave you with some more questions.

What’s your relationship to the earth?
How do you love her?
How do you let her guide you?
How do our stories inform you on how to love,  resist, inspire?

Almighty Voice and His Wife begins performances on October 11 and runs through until November 10. We invite you to join us for our first Indigenous production, and to share in the experience with artists and audiences alike.