John Shoesmith works at the University of Toronto’s Thomas Fisher Rare Book Library. Recently he contacted us with a very interesting item he found in the library’s archives.

We have an amazing artifact here at the Fisher: the programme from the original production of Rosencrantz and Guildenstern Are Dead when it premiered in Edinburgh in 1966. It’s part of the Ronald Bryden Papers held here at the library. Bryden has been credited with “discovering” Stoppard because he wrote the first glowing review of the play after it premiered, and at the time Bryden was a hugely influential theatre critic in London. What makes the programme doubly interesting is that it has Bryden’s annotations from the performance.

Scanned images of the original document are below, courtesy of the Thomas Fisher Rare Book Library, University of Toronto. 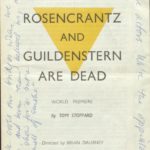 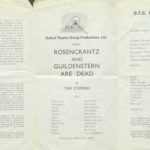 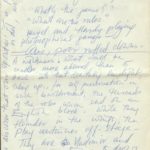