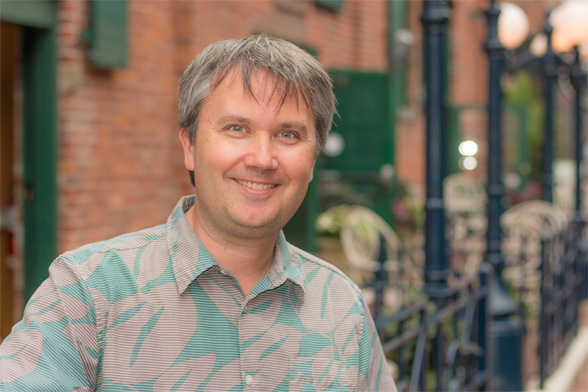 How long have you have worked at Soulpepper, and how would you describe your role?

Wow…hadn’t really thought about it until now but I’ve been here for two years.  Amazing how quickly the time goes by.  My role as Producer involves a wide range of adventures, everything from looking after our extensive Play Development program and our quickly expanding Audio Programming platform to negotiating rights for projects.  I also do a lot of industry outreach, meaning I connect with companies, producers, and artists to talk about potential collaborations.  Added to all this, I’m often the point person for shows that Soulpepper presents in the Young Centre.  My desk is usually a mess, but it’s a joyous mess.  Is that a term?

What kinds of projects are you involved in outside of work?

Life these days is Soulpepper and then home to my two boys.  The benefit of having two hockey-playing boys is that I get to hang out in all the hockey arenas in the GTA.

Ok…it’s not quite that drastic.  But it sometimes feels like it!

What is something we would be surprised to know about you?

I was the inspiration for a comic book character.  When I was (much) younger, I won first prize at a community rap contest.  I dropped out of a PhD in Marine Biology to play in the world of theatre.  There might be others but let’s keep some of the mystery alive.

What do you love about working at Soulpepper?

It’s always about the people, isn’t it?  And the people at Soulpepper are amazing.  On those days when your to-do list is weeks old, you have multiple shows opening, and the emails are coming in faster than you can respond, it’s the people around you that keep you sane.  And while the people around me may argue the point, I’m still relatively sane so I thank them all!