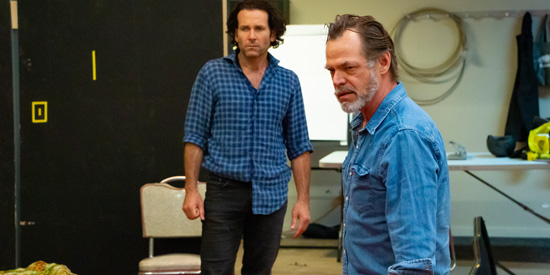 Stuart Hughes reflects on the experience of revisiting a play years later, but this time in Sam Shepard’s Fool For Love he’s saddling up for a new role.

When Frank Cox-O’Connell asked me to consider being in his production of Sam Shepard’s Fool For Love, I was intrigued. He knew I’d been involved in a production about 15 years earlier, playing the role of Eddie, the broken down, impulsive rodeo rider. Frank felt their might be some value in me now stepping into the role of ‘The Old Man’. That there might be some kind of familial thread which would be worth mining.

I have had the great fortune to be able to return to a number of great plays over the years. For a second, sometimes a third go round, but always in the same part and usually within a much shorter span of years. The Crucible, A Streetcar Named Desire, Twelve Angry Men, Zoo Story were a few that I was lucky enough to revisit. It’s always a real luxury. You get to mature and grow in a role, and in great pieces of writing. This, given the years between productions and the new role, would be a different kind of reunion. I reread the play to see what would grab me now that I was 15 years older, and also from the perspective of this different character. When I was younger, and given the nature of the young cowboys’ role, what I felt I was asked to explore was primarily the consuming nature of dysfunctional love.

Now, with this reading, what was intriguing me was the lineage of dysfunction. The repetition and cycle of pain that is handed like a baton from a deeply flawed man to the generation that follows him.

We see characters within the play struggling to either calcify in their destructive behavior or break free from it, and find some ease and resolve. Some Light. What speaks to me profoundly now in this play is the hope that that potential choice provides.

I’ve never been territorial about roles. I’ve always felt you get the opportunity to do a particular character to hopefully learn something. You go through that journey and then you leave it behind for some other person to do, in their own fashion, for their own reasons and needs. You push on to the next.

I remember being very proud of that earlier production of Fool For Love, and of everyone’s work on it, but I certainly didn’t feel any kind of ownership over the play or the role of Eddie. Having been on the inside of this piece, however, I knew its’ specific demands, and I knew it would be important to get the right spirits collected. It’s an extremely physical show. There are a lot of fights. You have to be able to throw a lariat. It’s a passionate, emotional cyclone, but you also have to be able to ride the poetry of Shepard’s language. And it’s chock full of great humor. There are a lot of demands. So I knew the right spirits would need to be gathered. When I heard who was being assembled, I started to get more and more excited about returning to this play, in this specific outing. Sitting in rehearsals I couldn’t be happier. I can’t imagine a better cast, director or gang of designers gathered to tell this story in a fresh and fiercely relevant way. It’s a real ball to watch Cara Gee, Eion Bailey, and Alex McCooeye ferociously jump into this world. Infusing these characters and this piece with such physical and mental athleticism and pure joy of playing. It’s dangerous, full of humour and intelligence. It’s passionate and painful. I am so proud to be along for the ride and I know audiences are going to be in for a very special experience.