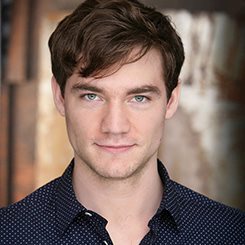 Daniel Durant was born in Detroit, Michigan and grew up in Duluth, Minnesota. Daniel performed in several Deaf West Theatre productions including the lead roles in Flowers for Algernon and Spring Awakening. He made his Broadway debut as “Moritz” in Spring Awakening. Joining the Norwegian company Teater Manu, working in and touring for 7 months in a lead role remains a highlight of his career and life to date. Daniel appeared on ABC Family’s Switched at Birth in his co-starring role as the character of "Matthew" for several years through the finale of the series. Daniel has received numerous awards and recognition, including the 2016 Theatre Award for Outstanding 2016 Broadway Debut Performance.

His ongoing work includes co-leading acting workshops for Deaf students in area schools, serving as an acting teacher and coach for Deaf film camps as well as national speaking engagements for colleges and universities. Daniel is passionate about acting and supporting the Deaf community and spends his free time connecting with new friends all over the world through his ASL videos on YouTube, Deaf Gamers Network and his Facebook & Twitter accounts.