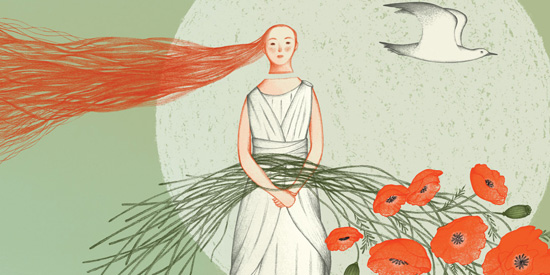 In the Moment of Contradictory Weddings by Mahdi Ganjavi

Sina Gilani’s version of Euripides’ Iphigenia at Aulis narrates a moment of stillness, in the horrifying progression of events toward ultimate (absurd) tragedy. This stillness, however, remains unstable. It is a militarized delay which creates so many value contradictions that the peace and innocence can’t hold any longer. As the virgin Iphigenia, daughter of Agamemnon, says before actively participating in her own horrifying throat cutting: “It isn’t right for us to persist in what’s impossible”.

Inspired by the Iranian tradition of carpet weaving, the piece starts with ‘fate’ depicted as three separate women following the weaving rhythm: Lift, Over, Under, Press, Tamp, Knot and Cut. The three fates embody the three tenses of time: Past, Present, and Future. Past (history) is more passive and silent through the play. She says: “We are not the story… no… we but hold its rhythm”. Present (contemporary) sounds playful, and wordy. She even manifests herself as contingent, but she too is only the ‘teller’ of life, unable to determine the content of it. Future, however, starts as the most rebellious of the three. She intends to replace the red thread in the plot with the green. Yet strikingly she evolves to become the most submissive of all three, the most content with what is being determined in this geography of militarization. The play starts when the Future loses a thread, and the three start to unknot the weave just to press, tamp and knot the weave of events back again. The narration, therefore, unknots from the moment of Cutting, just to arrive back at the moment of Iphigenia’s throat cutting more pressingly. The future of the text, therefore, is its ‘lost’ starting point. The eventual ritual of Iphigenia’s ‘sacrifice’ is the first thread of blood in a carpet that will later be coloured overwhelmingly red by the Trojan War.

As the play unveils, the three weaving fates can only slow or hasten the events. The story itself, however, is determined by the militarized condition of Aulis and the value contradictions that such context ignites. Iphigenia’s blood ‘has’ to and ‘will’ be shed because the militarized stillness isn’t sustainable. To appease Goddess Artemis – to have wind so that Greek army sail the sea toward Troy – Iphigenia has to be sacrificed. Either she accepts her fate, or the war-thirsty Greek warriors will slaughter her. Nothing can stop the warriors anymore, not even their commander Agamemnon or the Greek hero Achilles. It is only Iphigenia’s blood that can help wind blow (events progress), even toward a more bloody future. Future can only be weaved by the thread of red, and this is not the result of pre-destined divine ‘fate’. Instead, this tragic end is the consequence of the fact that a militarized stillness eventually pushes social values to contradict each other; to destruct the whole value system in the name of security and nation.

The entire course of events (which eventually will lead to the Trojan War) has started from a marriage broken; as Helen (West) has fled for Paris (East) disrespecting her owe to her husband, Menelaus. Marriage, therefore, is the most valuable in this plot.  While Agamemnon and Clytemnestra contradict each other in most values, they share one sentiment: To Marry is to sacrifice. [Clytemnestra: “Marriage is a sacrifice”. Agamemnon: “To wed is to sacrifice self, to unite, to become”.] With the rise of militarization the sacred concept of marriage, however, is easily used in the most cunning manner by the Nation’s commander to send for Iphigenia, on the pretext that she is being called to Aulis to wed the Greek warrior Achilles. Now the vows start to contradict each other: in the choice between the vow to his family or his Nation, Agamemnon chooses the latter, while Clytemnestra pushes toward the first. The question arises: Which do we sacrifice when our different social marriages are pushed to contradict each other?

In Aulis, this geography of militarized stillness, the values start to fade in the name of Nation’s Security and Common Good. The people, as a result, start to ‘purchase’ what they hate the most with what they most ‘love’. War heroes curse what they bless; as many start to thoughtlessly advance the rhythm imposed on them by warmongers, just by remaining silent.

The language of Gilani’s take, informed by Roger Beck’s ‘pedestrian’ translation of this play, also floats between poetical, urban, literary, and ESL modes of contemporary English. This choice mirrors the diverse, transitory, and contradictory forms of marriages (familiar or unsettling) which shape the plot. The language with its shifting modes and deviated grammar also manages to apply sarcasm to tragedy and marry poetry with absurdity. Gilani further keeps traces of his journey from East to West by active employment of ESL mode of expression.

In sum, Gilani’s metaphorical adaption echoes sentiments of fear, widely shared by its contemporary readers of the play who are observing the dreadful rhythm of events in the present militarized world.  The reader cannot stop but to think of his/her resemblance to Iphigenia, who has no choice but to ‘believe’ she is the protagonist in a narration that has given her no choice in any sense. By the end of this disturbing tragedy we ponder how long does it take for a militarized peace to push voiceless people actively participate in their own slaughter, self-deceiving that they will be revered in a future war history.