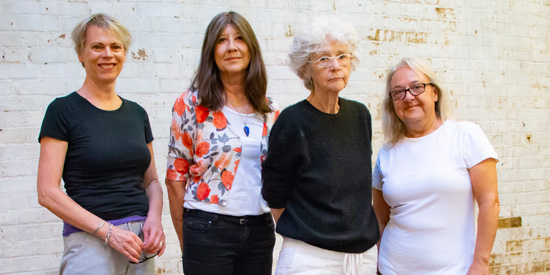 The four women of Escaped Alone reflect on their careers

Caryl Churchill’s Escaped Alone is written with four female characters over the age of 70,  which is something we don’t often see on stage. We asked Brenda, Kyra, Clare, and Maria to reflect on their first roles and compare it to their experiences now, working on Escaped Alone as established artists in their craft.

My very first role was in a production of a Polish play that was done at the Red Light Theatre Company in Toronto in 1977/78. That was the first Feminist theatre company in Toronto and they had been running all through the seventies but then that shut it down, that was the last production they ever did – I like to take credit for that! I was 22 years old.

It really is about the here and now and the work. My career is what my career is now at this age. So it’s very freeing.

I played Mary Warren in The Crucible when I was 14 or 15. That was magic to me. It was really magic to be able to submerge myself in that world – I had done a couple of shows before that point but that real role in a real play was just… I had a glimpse of what it was like really to be an actor and that was what I wanted to do with my life and it set me on a path that I’ve been lucky enough to follow through all my life.

Now doing something like this with four women of a certain age. I look at it from a totally different perspective. The work is so important, I still feel as an older actor that I am learning all the time and I’m eager to learn but there’s more ease in the work. There is more accumulated knowledge, and comfort, the comfort of being in the room with four other women who are similarly minded and of a similar age it’s just such a comfort and it helps to make you feel fulfilled in the work and the environment.

My first role that I remember was in Grade Five, we were doing Mother Goose Stories, and I really wanted the part of Mother Goose, but we had to do an audition piece and my dad had taught me a poem which was:

I got the part of Mother Hubbard, which is an OK part, it wasn’t the lead though. And the girl who got Mother Goose did To Be or Not To Be. From Hamlet. In Grade Five.

That was still a good audition piece and I could probably still learn something from that, you know, the purity of that… The truth of it as an 11 year old.

I have to admit that this play now is kind of reminding me of my parents, so maybe it is a bit of a full circle – learning that wonderful audition piece from my dad for my first part and now pretty well playing a relative.

For my first role I was a child, a Canadian child, in London, England. I was a lost elf in the pantomime Where the Rainbow Ends at the Coliseum in London. It was very exciting to be what I thought was a professional.

The first school I went to was a ballet school in a church hall run by a very eccentric woman, and a few eccentric parents sent their children there to avoid the school system. The whole year was spent preparing for the summer charity concert that was held at the Fortune Theatre in Drury Lane. The days were spent preparing for these little concert presentations of musical songs and pas-de-deux and tap dances – all the things that were current in London for entertainment. I was under the illusion that I was a little professional.  Somehow, at the age of nine, I found myself ironing all the layers and layers of tutu and then jumping into a cab with my costumes and saying to the cab driver “Fortune Theatre, Drury Lane. Stage Door please.” And thinking he must think I’m a big star. It was those years you could just imagine you’re everything you wanted to be.

I was in London then because of my parents work, and when my parents work took them back to Canada, I was sea-lifted back to my own country and was absolutely desolate. There was no opportunity for children, or anybody actually, to have a career in theatre in the 1950s. Stratford had begun, but it wasn’t exactly something that people would say “I will make my career there”, it can be now, but it wasn’t at the time.

I went into this period of growing up having lost what I thought I could do and was very homesick for London and for my lost life. When I came to graduate I could’ve gone back to London to take up my life as an actress there. I had been so homesick that I thought I could never go through it again, and I didn’t want to be homesick for Canada so I thought I’d do something else. Thinking “obviously there is no theatre here”, I went go to the college of art.  Sitting in front of a block of paper or a canvas in silence all day long was just not the thing that suited me at all – I needed to be with people. It wasn’t long after that that Pierre Trudeau that came up with Local Initiative Program grants for anyone that wanted to initiate something in the arts. This is when Theatre Passe Muraille started, Tarragon started, Factory Lab started, all these came from these Local Initiative Program grants and so I suddenly had a beginning!  I started out with people my own age and we didn’t know very much and nobody knew anything about us. We were in church hall basements again, and if it weren’t for Urjo Kareda as the Toronto Star critic, I don’t know where our audiences would have come from. He began promoting like crazy these small groups saying “If you think you’ve seen good theatre at Stratford, come back here and you’ll really see something now.” We all kind of watched in wonder as he, through the press, built more and more credibility for what we were doing and it became something of wonderful happiness.

I really found my thing at Tarragon – Bill Glasgow was exploring scripts and writers. I found I could get a lot of satisfaction out of written scripts, and that lasted for a very long time.In some ways I feel I’ve done my best work for international writers, maybe because my earliest training as a child was not in Canadian writing but in English and American. For those English writers like Caryl Churchill, I feel like I’ve done very, very fine work for her. And yet my heart has always been with Michel Tremblay, Judith Thompson, and George Walker, and the people who have made this country come to light in the theatre.